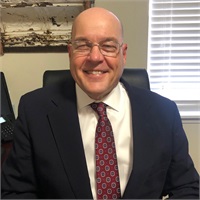 Robert graduated from the U of A in 1981 with a degree in psychology.  He started working for Metropolitan Life in 1989 & then began working with Nationwide in 1993.  Robert owned a Nationwide Agency until 2018, when he merged with the Hayes Rasbury Agency. With Nationwide, he earned 5 Champion awards and 4 Life University awards.  He has earned the CLU (chartered life underwriter), CLTC (certified long term care specialist) & CLC (commercial lines coverage specialist) designations. Robert has been married to his wife Donna for 34 years. Their children are Brad & his wife, Davis-Ann, & their daughter, Madeline, and daughter Paige. His hobbies include: hunting, traveling & antiquing.